Whew, it's been a while, but we did it - another Born to Do Science program for the books!

My guests were Dr. Karen McBee and her student, Rachel Eguren, whose study we talked about.
I performed a brand new song based on Rachel's research. She wanted to find out whether the bats at the Tar Creek superfund site are affected by toxins in the area. She had to come up with a really clever way to answer that question, since you can't just ask a bat how it's feeling. The song, "Figure It Out" takes the form of a few journal entries where the researcher is trying to feel her way through the process. Scientists don't get to follow directions in a lab book - they're figuring out how to do things as they go!


What Rachel ended up doing is flying bats through an obstacle course made of strings that would drop when hit by a bat's wing. She charted the time each bat spent in the air against the number of strings dropped. As you would expect, for the control group (bats from a healthy habitat), the longer the bats flew the more strings they knocked down. However the Tar Creek bats showed almost no such correlation!

To get us in the question asking mood, we ran the kids through their own obstacle course, made from sections of carpet tubes. In hindsight, we should have placed the tubes closer together, or maybe had the kids stick their elbows out like bat wings, because even when we spun them with their eyes closed to simulate bats whose brains are addled with lead, hardly a tube got knocked over. Rachel had more time than we did to design her obstacle course. She made sure the strings were placed so that the bats could get through without knocking strings, but it was a challenging for them.

After our activity we discussed lots of details about Rachel's study, including how she video taped the bats using a night-vision (infra-red) camera. She needed a marker in the bat cage to show depth so she could tell on the video whether the bats were flying through the obstacles. The marker had to be warm, to show up on camera, it had to stay warm for a long time, it couldn't require an electric outlet since she did her trials outdoors where the bats live, and it had to be relatively inexpensive. See the photo caption to find out what she used...


Rachel is still compiling results from the lab so she can correlate each bat's performance in the obstacle course with the levels of toxins found in their body tissues. But judging from the bats' performance in the obstacle course, the is definitely something different going on with the Tar Creek bats. The heavy metals in the area, including lead, may be affecting the bats' brain function, which could interfere with their ability to maneuver. This would make it more difficult for them to hunt at night.

The heavy metals in the soil and water around Tar Creek were left there by mining operations started over 100 years ago. In 2009 the town of Pitcher was completely evacuated due to the toxins. Dr. McBee and her students are studying many different aspects of how wildlife in the Tar Creek area has been affected. 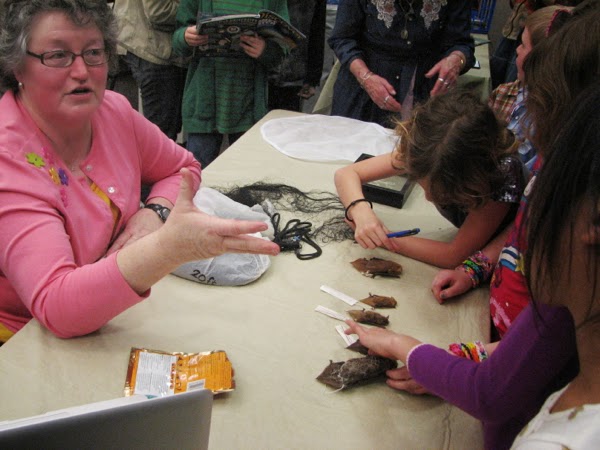 Thanks to Rachel, Karen, and the Stillwater Public Library for making this program possible, and for support from the National Science Foundation.

See you next time for "Loser Lizards and Motherly Winners!"

Email ThisBlogThis!Share to TwitterShare to FacebookShare to Pinterest
Labels: bats, Past Events, Zoology