I've been on hiatus from BTDS, but I'm back, and gearing up for some new programs soon. More about that later. First order of business - the last few programs in 2012 never got write-ups, so I'm posting them now!

In February 2012 our speaker was Dr. Rob Burnap from the Department of Microbiology at OSU. Dr. Burnap is trying to work out a very important and very difficult puzzle - how exactly do plants accomplish photosynthesis?

Photosynthesis is that trick we all know plants like to do. They turn carbon dioxide, water and sunshine into oxygen (good for us!) and chemical energy that they use to grow.


This is an important trick to understand. Part of the process involves splitting water molecules into hydrogen and oxygen. If we knew how to do that as efficiently as plants, we'd have have our energy problems solved! That's because the reverse process, putting oxygen and hydrogen together to form water, releases a lot of energy quickly. 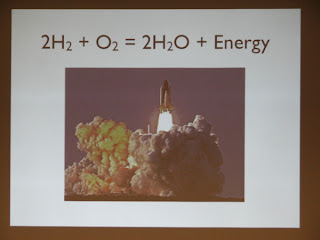 We CAN split water using a process called electrolysis. Dr. Burnap brought a special electrolysis set-up that allowed us to see (using a ph indicator that changed colors) how it works. We connected electrodes to a battery, put them in the water, and watched the bubbles of hydrogen forming on one end and oxygen on the other.

We used a nine volt battery to supply the power needed to pull those water molecules apart, and the bubbles came out pretty slowly. A plant could do the same thing with just one volt's worth of sunshine! We tried using a one volt battery, but nothing happened.


Unfortunately electrolysis uses up way more energy than you can ever get back by burning the hydrogen it releases. But if we knew exactly how plants use sunlight to split water, maybe we could do it that way. Then it wouldn't cost much at all to produce lots of hydrogen (or possibly hydrocarbons, similar to gasoline).

But if you're like me you probably never realized that chlorophyll doesn't do the job alone. Dr. Burnap studies the protein structure that contains the chlorophyll. It's called the "reaction center," and it's a molecular machine that brings all the ingredients for photosynthesis together, recombines them, and moves the resulting products apart.

It's a photosynthesis machine!

How exactly does the photosynthesis machine work? We know a lot about it already, but there are still many details to figure out. The challenge is: how do you study a machine so small you can't even see it with a microscope?

One way Dr. Burnap studies the molecular machine is by measuring how fast it works, then messing with it to see if he can slow it down. He uses a strobe light and an oxygen detector as a speedometer. The light flashes; the plant makes oxygen; the detector measures how much and how fast. We're talking super-fast speeds here. The video below shows how quickly the strobe light flashes on and off.

To slow down the machine, Dr. Burnap gave his algae heavy water instead of regular water. Heavy water is made with deuterium instead of hydrogen. Deuterium is a hydrogen isotope, containing one proton AND one neutron, so it weighs about twice as much as regular hydrogen. Heavier things are harder to move, so...

Would the machine have a harder time moving these heavy hydrogens out of the way? If so, would that also slow down the rate the oxygen gets released? It turns out: yes, and yes!

Dr. Burnap suspects that certain parts of the photosynthesis machine act like a bucket brigade. A series of proteins pass each hydrogen atom down the line in order to move it out of the way once it's been freed. One way to test this hypothesis is to change the machine and see what happens. Dr. Burnap was able to grow a special algae by "knocking out" one of the proteins in the bucket brigade. With this protein missing, would the hydrogen pile up? Would that slow down or stop the photosynthesis process?

Using the strobe light and oxygen detector speedometer, Dr. Burnap discovered that even with one of the proteins missing, the machine worked just fine! This suggested to him that the proteins are not arranged in a straight line, but are interconnected so that the hydrogen has more than one path out.

We had a blast during the program re-creating Dr. Burnap's bucket-brigade experiment with people standing in for proteins and balloons representing hydrogen and oxygen molecules!

It's pretty amazing what we can figure out about how a machine is put together, even if it's too small to observe directly! If we keep piecing together details, one day maybe we'll be able to build our own photosynthesis machines to convert sunlight into chemical energy that we can use!

Posted by Monty Harper at 1:11 AM No comments: