Our first program of the new year was Dr. Shelia Kennison, "This is Your Brain on Words!"

If you really think about it, it's an amazing thing that we can get lost in a book the way we humans often do. I mean, look at a page and what do you see? Black squiggles on a white background. Somehow we turn those squiggles into words and those words into sentences and those sentences into stories that envelop us like waking dreams. What exactly are our brains doing to make that happen?

If brain scanners were faster, we might be able to just watch a person's brain light up as they read. But we decode words way too quickly for any current brain scanning technology to record the process. Dr. Kennison uses an ingenious method that brings us baby-steps closer to understanding what goes on inside when we read. She peeks into the workings of our brains - with grammar.

When we see a singular noun that might not make sense in a sentence, this doesn't bother us much because singular nouns are often used as adjectives.

However, if we make the noun a plural, that's different!

There's really no way to finish that sentence so that it makes good sense.

Dr. Kennison investigates whether these types of grammar glitches can tell us anything about how the brain is working, and she has uncovered some very intriguing patterns.

To understand what Dr. Kennison discovered we need to know about the corpus callosum. This is the part of the brain that connects the left and right sides together. It's the only pathway by which the left side of the brain can "talk to" the right side, and visa versa.

Just like an internet connection has a particular data transfer rate (or speed), so does a corpus callosum. We call that speed the interhemispheric transfer time, or IHTT. We can measure a person's IHTT at a given moment by having them respond to flashes on a computer screen.

For a long time we've known that various different language functions are handled by the left brain. However over the past ten years or so the role of the right brain in language has become more apparent. Dr. Kennison believes that the two halves of our brains are probably always working together to decode language.

She gave her subjects a whole bunch of sentences to read. Some of them had trick plural nouns in them that didn't make sense. Others had weird singular nouns. Others were just regular sentences. She measured if and when each reader slowed down, and by how much. (We're talking about milliseconds here - very small differences in time!)

Then Dr. Kennison measured each of her subject's interhemispheric transfer time. Remember, that's the speed of their corpus collasum. And guess what she found?

The speed of a person's corpus callosum corresponds to the amount they slowed down when reading weird singular nouns.

What this might suggest is that when we come to an unexpected singular noun in a sentence, the left brain consults with the right brain (via the corpus callosum) to try to make meaning out of the strange word combination. Maybe the right brain is telling the left brain to go ahead and consider the next word because this unexpected noun might make sense as an adjective.

Of course as with any new study, the results are tentative. Dr. Kennison plans to run many more experiments to see if she will continue to observe this interesting effect! And hopefully many more similar experiments will help us better understand how we make meaning out of all those squiggles on a page! 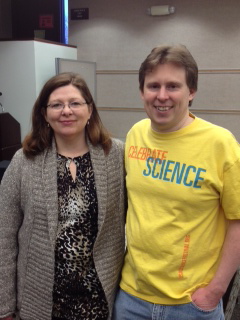 Posted by Monty Harper at 8:20 PM No comments:

Email ThisBlogThis!Share to TwitterShare to FacebookShare to Pinterest
Labels: Past Events, Psychology

Our next BTDS program is about studying the brain! How does your brain work?? You might know that it's separated into two halves - the left brain and the right brain, and that the two halves generally specialize in different types of thinking. The two halves are connected by a thick cord of neurons called the corpus callosum. 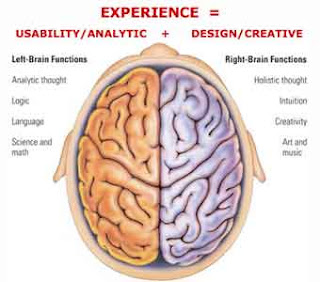 Most of what we know about which half does what we've figured out from brains that aren't functioning normally. For example if a person's brain is injured and they lose the ability to speak, then we know that the part of the brain that was injured must have something to do with speaking. Studies on people whose corpa callosa has been severed (for other reasons) can tell us a lot about how the left brain functions without the right and how the right brain functions without the left.

But it's a lot harder to find out anything about how the brain works when it's whole and healthy and functioning properly. We can't just watch it do its thing! How and when and why do the two halves "talk" to one another? What does each half contribute when they are working properly together?

Our guest scientist this month has an ingenious way of studying these aspects of our brains!

Dr. Shelia Kennison is a psychologist who uses glitches in language as windows into how our brains function. By carefully studying how people make meaning out of written words, she can reveal communication between the two sides of the brain!

We will get to experience what it's like to be one of Dr. Kennison's subjects, and as always we'll get to "think like a scientist" and explore other ways the mysterious workings of the brain might be understood.

The program starts Saturday morning at 10:00 at the Stillwater Public Library, room 119.
I hope to see you there!!


In the meantime, check out these related websites!

- For a quick overview of left and right brain functions check out this chart from funderstanding.com

- The Split Brian Game - you become a researcher studying "Mr. Split Brainy." See if you can figure out what's going on in his head!

- To find out how left or right brained you are, take this test!

Thank you for taking the Creativity Test. The results show your brain dominance as being: