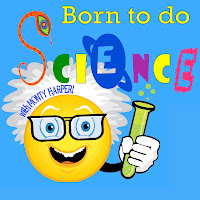 Born to Do Science brings kids face to face with scientists to learn about their research. Programs begin at 10:00 AM usually on the third Saturday of each month, and run about one hour. They are located at the Stillwater Public Library. Attendance is free and open to kids in 3rd-7th grade and their parents. Participants should register ahead of time with the library when possible.

The program is hosted by children's songwriter Monty Harper, who introduces each topic with a brand-new song. Guest scientists include zoologists, physicists, psychologists, and biologists from OSU and OU. The line-up for 2011/2012 includes nine programs with topics ranging from teenage behavior to the nature of the universe.

September 17
Vaccination Innovation
Helping Our Bodies Combat Quickly Changing Viruses
Abbie Smith, doctoral student in immunology at the University of Oklahoma, will speak about her work on a new approach to vaccination that may provide protection against unpredictable viruses such as seasonal flu and HIV.

October 15
The Intrepid White-footed Mouse
How Toxic Waste Affects Animal Populations and Diversity
Dr. Karen McBee, Curator of Vertebrates with the Department of Zoology at Oklahoma State University, will speak about her research into what makes some animal species more resilient than others at the Tar Creek Superfund Site.

November 19
Pieces of Protons
Ramping Up the World's Greatest Physics Experiment
Dr. Flera Rizatdinova from the Oklahoma State University Department of Physics speaks about her work testing the ATLAS detector at CERN's Large Hadron Collider. The ATLAS is a marvel of technology built to explore dark matter, gravity, the standard model, and other deep mysteries of the universe!

December 17
Popular Teens - Friendly or Mean?
The Role of Aggression in Teen Popularity
Developmental psychologist Lara Mayeux PhD from the Department of Psychology at the University of Oklahoma will speak about her research into the underpinnings of social status among teenagers.

January 21
This Is Your Brain On Words!
How We Pull Meaning Out of Written Language
Do you understand this sentence? How? Shelia Kennison, PhD, from the Department of Psychology at Oklahoma State University will speak about her research into how our left and right brain hemispheres work together to create meaning while we're reading.

February 18
Digesting Sunshine
How Mother Nature Converts Light Into Chemical Energy
Dr. Robert L. Burnap from the Department of Microbiology and Molecular Genetics at Oklahoma State University will speak about his study of the enzyme plants use to split water into hydrogen and oxygen and how a better understanding of photosynthesis may lead to more efficient production of biofuels.

March 10
My One and Only Vole
Pair Bonding in Monogamous Prairie Voles
Tomica Blocker, master's student in Zoology at Oklahoma State University and recent recipient of an NSF Graduate Research Fellowship grant, will speak about her investigations into the mating habits of these amorous rodents and how they may be affected by human industrial activity.

April 21
Predators, Prey, and the Games They Play!
Computer Models Reflect Real-World Animal Behavior
Dr. Barney Luttbeg from the Oklahoma State University Department of Zoology will speak about his research using tadpoles, dragonfly larvae, and computer simulations to understand the complex interactions between predators and their prey.

May 19
The Fungus Among Us!
When Fungi Attack, Science Fights Back
Stephen M. Marek PhD from the Department of Entomology and Plant Pathology at Oklahoma State University will speak about his use of molecular tools to investigate "who done it" and how to stop it when important crops suffer damage from pathogenic fungi.

Posted by Monty Harper at 12:01 PM No comments: