Feedback, please!
Please post comments below or write to btds at montyharper.com - What worked for you? What didn't?
I will incorporate your feedback as I tweak the format over the next few episodes.

Also, please post your questions about the science!! They will be answered!

Email ThisBlogThis!Share to TwitterShare to FacebookShare to Pinterest
Labels: Podcast 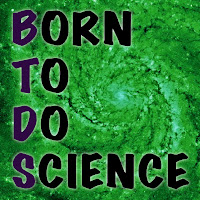 Podcast Launch - 11/28!
The first episode of the Born to Do Science Podcast has been recorded!
I will post it here on Monday, November 28, for free download.
I want to gather the biggest audience possible for Episode 1.
Please Help!
These are my goals for November 28, updated every day:
- 100 supporters on Causes.com (need 46 more!)
- 52 subscribers to the podcast email list (need 43 more!)
- 100 likes on the BTDS facebook page (need 59 more!)
OR
- 75 followers on Twitter (need 54 more!)


Rewards For All!
If we reach any of the above goals by November 28, then along with the podcast I will also post the featured song, "My Molecular Eye," as a FREE download for one day!
But wait there's more! If we double any one of these goals, OR if we reach all four goals - I will post the entire Songs From the Science Frontier CD as a free download for one day!!!
Please tell your friends! Thanks!! 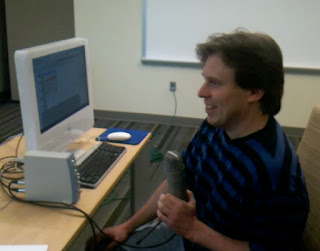 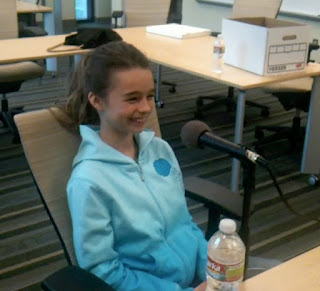 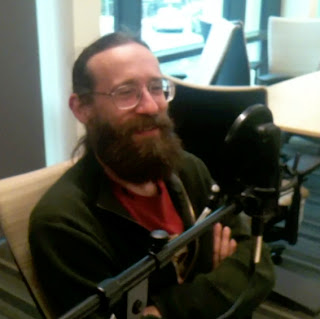 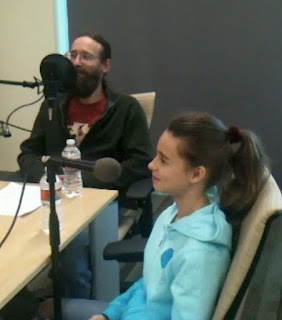 Posted by Monty Harper at 11:37 PM No comments:

Email ThisBlogThis!Share to TwitterShare to FacebookShare to Pinterest
Labels: Podcast

Muons, Electrons, and Quarks, Oh My!!

We had a great program Saturday! (I always say that, but it's true.)


For the first hour Dr. Flera Rizatdinova spoke with us about the Large Hadron Collider - the world's largest machine! - and the Atlas Detector. We also explored the Standard Model of particle physics and learned about some mysteries of the universe such as: What is dark matter? and How do particles get their mass? These are questions the LHC was designed to help answer.

Then we took a break to look for muons! Muons are elementary particles similar to electrons, but heavier. They are formed when high energy protons (cosmic rays) smash into the Earth's upper atmosphere. A shower of particles are created. This is basically the same thing that happens inside the ATLAS detector! Muons happen to live a relatively long time, so they are the ones that make it all the way down to the Earth's surface. There are thousands of muons passing through your body every second. They are way to small for us to see or feel them.

So if they are too small to see, how were we looking for them? With a detector of our own - a cloud chamber. This is a tank filled with alcohol vapor. The vapor is cooled at the bottom of the tank by dry ice until it's almost ready to condense. The cooled vapor is so unstable that a muon passing through it triggers the condensation. What you see then is a cloud of alcohol droplets. Each cloud appears spontaneously, taking the shape of the path of the muon that triggered it - usually a straight line - then drifting to the bottom of the tank.

After our break, for those who were interested in learning more, Dr. Rizatdinova spoke about her particular role in the LHC and the research that's being done there. The ATLAS detector is like a giant camera that records each proton collision, tracking all the hundreds of particles that fly out. There are about six hundred million collisions per second to record, and the data fills 15 million gigs of hard drive space every year! 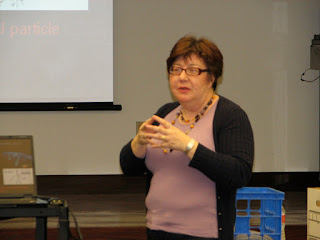 Dr. Rizatdinova's team designed a piece of electronics that converts electric signals from passing particles into light, which is piped out of the detector in fiber optic cables and then converted back to electric signals. Why is this necessary? There are 80 million channels of data coming out of each pixel module! If these were each carried out by wire, well you can imagine the mess - there isn't room for it!

Dr. Rizatdinova's team also wrote the software to interpret these signals, determining whether top quarks are present. Top quarks are heavy particles that might indicate the presence of a Higg's Boson.

The Higg's Boson is one of the reasons the LHC was built. It's the last of the fundamental particles in our Standard Model of the universe that hasn't actually been observed yet. If it really exists, as we think it does, the LHC will find it. The Higg's is important because it is thought to explain how particles get their particular masses.

Here's how the searching works. The LHC accelerates protons to very close to the speed of light and then smashes the together and records all the particles that come out. Even though protons are relatively lightweight, much heavier particles can pop out when you collide them at such high energies. This is due to the conversion of that energy into mass.

The heavy particles that are formed don't stay around very long at all - nearly instantly they decay into a shower of smaller particles, which also decay into showers and on down the line. The detector isn't fast enough to actually "see" a Higg's Boson before it decays, but it can see the top quarks and other particles that it decays into. If the right pattern is detected, we'll know the Higg's was there! 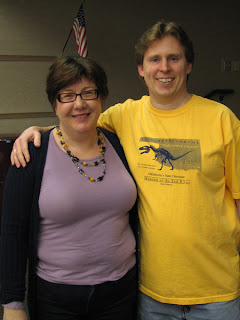 As I said, it was a great program! Everybody's head got stretched a bit, and many great questions were asked. As I reminded the audience several times, it's natural to have trouble picturing all this! Sub-atomic particles are unlike anything in our human-scale experience. Even particle physicists have trouble visualizing what's going on down there in the quantum world! I sure enjoy trying, though, and I think the kids yesterday did as well.

Our next program is about something almost as difficult to fathom: Teenager Psychology!! Please join us December 17!
Posted by Monty Harper at 9:54 PM 2 comments:

Email ThisBlogThis!Share to TwitterShare to FacebookShare to Pinterest
Labels: Past Events

Howdy friends! I've been looking forward to this coming Saturday's program for a long time! Here is the official description, then I'll tell you more about why I'm so excited...

Ramping Up the World's Greatest Physics Experiment
Dr. Flera Rizatdinova from the Oklahoma State University Department of Physics will speak about her work on the ATLAS detector at CERN's Large Hadron Collider. The ATLAS is a marvel of technology built to explore dark matter, gravity, the standard model, and other deep mysteries of the universe!

Dr. Rizatdinova was kind enough to drive all the way to Texas and back to pick up a piece of equipment called a cloud chamber that detects other fundamental particles called muons. Muons are similar to electrons. They are generated by cosmic rays and they are zipping around us all the time - we just can't see them.

But when they zip through the cloud chamber - we will see their trails!

That's one reason I'm so excited. Another is that the ATLAS detector and the Large Hadron Collider (LHC) are FAMOUS!! If you listen to any science news then you will hear them mentioned a lot.

The ATLAS is like a gigantic microscope, for looking at the tiniest things! And it's the world's largest physics experiment!

There are several new things physicists might discover with the ATLAS. One of them is the famed Higg's Boson, which is the last missing piece in our Standard Model of the universe. If they find it, we'll have a complete understanding of how the universe is put together. If they don't, then our Standard Model is wrong, and we'll have to come up with a new one to explain how things work.

Either way is exciting! And the Higg's could literally be discovered any day now. So we are witnessing history in the making!

I've been studying particle physics to get ready for this program, and let me tell you, it's weird! If you don't understand everything on Saturday, don't feel bad. Even the physicists who study this stuff don't really quite understand it. But that's what makes it so much fun!

If you want to prepare for Saturday, here are some websites to visit. In fact PLEASE visit these sites and learn all you can! I think you'll enjoy them...

Have fun exploring and I'll see you Saturday, 10:00 AM at the Stillwater Public Library!
Posted by Monty Harper at 12:38 AM No comments:

Dr. Karen McBee is an environmental toxicologist at OSU. She and her students study the area of Northeast Oklahoma known as Tar Creek, a superfund site where 100 years or so of mining left huge piles of chat everywhere. (See the previous post!)
The basic question she asks is, how does this affect the wildlife?
We began the program with a new song, as usual - "What Goes On?" which asks:

What goes on - after we’ve left such a mess?

What goes on - how does nature handle stress?

Humans come to alter every corner of the land

Yet we rarely come to understand

Once we're gone, what goes on?

Then we learned some background about the Tar Creek site and the animals that live there, and animals that live in nearby less altered habitats. We talked about different tools and methods scientists use to study populations in the wild. Then I asked the kids to think about what kind of research questions they might ask.
We had so many great questions and ideas that the conversation went long beyond our usual ending time. I think everyone enjoyed speculating about why the white-footed mouse is so adept at living in the affected area, while other small rodents have disappeared, and thinking of ways to try to figure it out.
Photos below...