Songs From the Science Frontier

Can you take a few minutes to help me out?

Remember those songs I started each program with over the past two years? I've been polishing them up, and I've got enough to make a really great science CD!

I'm excited about this because it will help bring the science and scientists that you've been enjoying in the live program to many thousands more kids.

I'm planning to record with producer Chris Wiser of the Sugar Free Allstars! He'll help me get a fantastic sound in a pro studio with amazing musicians. We plan to make a CD that families will want to hear over and over again.

All I need is the funding to make it happen!

Please support my fundraiser on Kickstarter.com. You can pledge any amount from $5 on up. (No money changes hands unless and until I reach my goal.) For a pledge of $20 you can pre-order a signed CD, and know that you helped connect more kids with science. Other amounts will get you various other rewards.

If I reach my goal by August 21, which is also my birthday, I'll throw a live online video party for all my backers, at which my wife, Lisa, has promised to smoosh a chocolate cake in my face!

Please check out my three-minute pitch video on kickstarter.com, then consider pledging to support my project.

Please also help spread the word. Below the video are buttons for facebook, twitter, and email that make it easy.

P.S. Stay tuned for news about the next season of "Born to Do Science!"

P.P.S. Check out this "Born to Do Science" theme song (while available) and let me know what you think!
Posted by Monty Harper at 12:36 PM No comments:

Remember our first session this past season, "Super Wheat" with USDA wheat geneticist, Cheryl Baker? Remember she brought little vials of wheat for us to look at and taste?
I got an email from the Slavens family a while back. They said, "Thank you for giving us the wheat. We planted it and look how much it has grown! Thank you lots! :)" 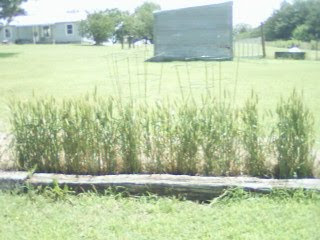 Recently I received this update: "We have harvested the wheat and hope to get it cleaned, the old fashioned way, with a sheet and some breeze. Our goal is to eventually make some bread! Wish us luck!"
Is that cool, or what? Good luck to you, and let us know how it goes with the bread!
Posted by Monty Harper at 11:11 PM No comments:

It's way late, but I'm finally posting my report and photos from our last session of the season!
Dr. Regina DeWitt was our guest, and she showed us how luminescence dating works. (See my previous post) 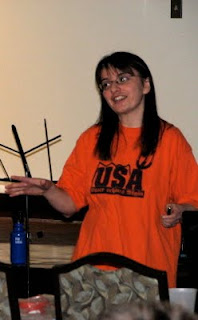 I sang a new song called "Grain of Sand" which explains the process from the sand's point of view. Just to set the mood, and to let our eyes adjust, I sang it in the dark.
Then we all headed into the closet. That's right! See what kind of shenanigans you've been missing?
There's a large closet in the back of the room. It was the only available space we could make dark enough to see the demonstration Dr. DeWitt had prepared.
So everyone crowded into the closet, and that's when we realized that Dr. DeWitt's hot plate wasn't working and needed to be plugged into a different outlet. I had to scramble around in the dark to figure that one out. Turns out the outlet was near the top of the wall!
Meanwhile it was getting pretty dicey with all those warm bodies crowded into a small dark space! But we got past it.
Dr. DeWitt heated up some dosimeters on the hot plate. They look like little white pills in the light. In the dark, as they warmed up, we could see them start to glow a nice pale green.
They work the same way as the sand grains Dr. DeWitt uses to date archeological digs. The dosimeter accumulates radiation damage, which basically means electrons are knocked loose and get trapped in flaws in the crystalline structure. (She had irradiated them ahead of time.)
When heated, the trapped electrons gain enough energy to escape and travel back to where they belong. Moving electrons emit light, and that's where the glow comes from.
Once we were all out of the closet, we had plenty to think and talk about. It was a pretty lively group. I'm thinking of starting every BTDS in the closet!
Dr. DeWitt brought a geiger counter in order to show us that many common things are slightly radioactive, such as bananas and nuts. 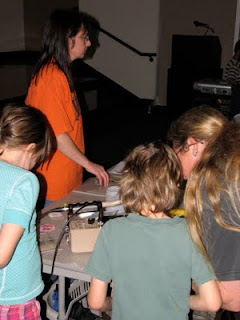 The kids had fun both during and after the presentation, testing different objects for radioactivity. 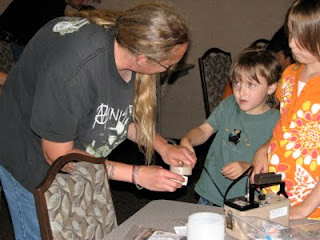 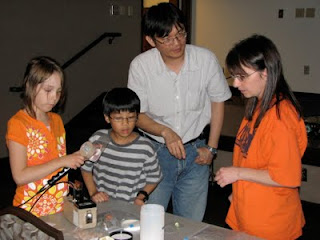 Watch for an announcement soon about our planning meeting for the next season of BTDS! If you are a researcher in or near Stillwater, OK, we'd love to have you as our guest scientist. Please write!

Posted by Monty Harper at 5:58 PM No comments: